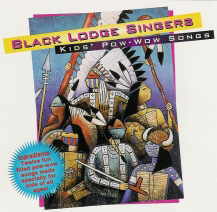 The Black Lodge Singers of White Swan, Washington are one of the most respected pow-wow groups in North America. Headed by Kenny Scabby Robe of the Blackfeet, the Black Lodge Singers are largely drawn from his twelve sons. In demand as a host drum at pow-wows around the United States and Canada, Black Lodge has released twenty albums for Canyon Records including an album of pow-wow songs composed specifically for children. They also contributed tracks to Ancestral Voices, a 1994 Grammy Awards finalist by R. Carlos Nakai and William Eaton. Several of the Black Lodge Singers are noted for their prolific songmaking, each year creating new pow-wow songs that quickly become popular throughout the pow-wow circuit.