Derek Miller - Music Is The Medicine 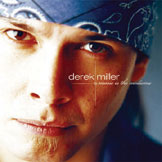 Derek Miller - Music Is The Medicine

WINNER 2003 Juno Award for Aboriginal Recording of the Year"
WINNER "Outstanding Music Achievement Award" for Music Is The Medicine
First Americans In The Arts
:: 2003 - Hollywood, California

Singer/Songwriter, Derek Miller, was born and raised on the Six Nations Reserve in Ontario. His upcoming release, Music is the Medicine, is a perfect amalgamation of influences culled throughout his 14 years of performing. Blues based rock inspired by the likes of Link Wray, Jimi Hendrix, Bob Dylan and Hank Williams Sr. is how his music is best described. Derek's live performances strike a contrast between the dark, soul searching messages in his music and his light hearted enthusiasm and vitality. Derek performs his music with an air of feeling totally comfortable on stage�like he was born explicitly to write, sing and play.
Having performed at showcases, the occasional opening act solo slot and many shows in his own right, Derek has been brought to the attention of veteran and well respected musicians, such as Daniel Lanois, Robbie Robertson and Buffy Ste. Marie. He opened for Buffy on a series of theatre concerts where he wowed crowds with songs from his debut five song EP CD entitled Sketches. In 1999, this EP won him a Canadian Aboriginal Music Award for Best Male Artist. During the same year, Derek moved to Arizona where he co-produced the Keith Secola and the Wild Band of Indians "Fingermonkey" release. This inadvertently won a Native American Music Award in 2000 for Best Independent Album. In the Fall of 2002, Music is the Medicine a colaboration with Juno Award Winning Producer Brandon Friesen will be released on Grammy Award Winning label Soar Records in the United States and Arbor Records in Canada. Music Is The Medicine has already won "Aboriginal Recording of the Year" at this years Juno Awards and the "Outstanding Music Achievement Award" from the First American In The Arts! Derek continues to tour in support of his new releases throughout Canada, USA. and Europe.
THE BUZZ
Derek is like Neil Young, Leonard Cohen, Kris Kristofferson�but better�he's got a Mohawk heart."Buffy Ste. Marie"
Miller is a modern day Link Wray/Pete Townsend power chord rocker with style� C.J. Holley, Get Rhythm Magazine U.K."
Imagine if the members of Crazy Horse all had kids who decided to start a band and you�l have a pretty good idea of what Miller, a Mohawk from Six Nations is up to�"John Sakamoto, The Toronto Sun"
Derek Miller's emotionally charged performance wows. "Rosie Levine, Now Magazine, T.O."
A compelling new voice from Canada."Mitch Potter, Starweek Magazine" Derek's guitar playing and vocals really get under your skin. "Robbie Robertson"