Tiger Tiger - Peace From The Everglades 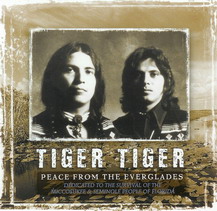 Tiger Tiger (Lee & Stephen Tiger) is not an ordinary American rock n' roll band! Inspired by the nature of the Florida everglades, their American Indian culture and Chief Buffalo Tiger (Their Father) of the Miccosukee Tribe of the Indians of Florida, the brothers career highlights include initial recordings at Woodstock (Later released on Sony's ZYX label in Germany).
Their love of music and performing has led them to international stages as feature artists worldwide including concerts in Spain, Germany, France, U.S.A. and San Francisco.