Mary Youngblood - Heart of the World 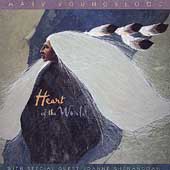 The next evolution of Mary Youngblood's original sound promises to take listeners to places they have never been with the Native American flute.

Colorful, poignant and textured, these songs are uniquely presented including vocals by Joanne Shenandoah on six tracks and instruments including guitar, cittern, dulcimer, bass, drums, eagle bone whistle and of course, Youngblood's exquisite multi-chamber Native flutes. Both meditative and playful, this recording is a true celebration of the heart. Dedicated to three Americans who worked with the U'wa people of the rain forest, this recording is named Heart of the World, the name the U'wa people have given their native lands in South America. A portion of the proceeds from this release will benefit the U'wa people and their fight against the global oil companies who are threatening their lands.

Heart of the World has been named BEST NATIVE AMERICAN RECORDING by The Association For Independent Music (Indie Award) and New Age Voice (NAV Award). This release has also garnered the NAMMY Award for BEST NEW AGE RECORDING at the 2000 Native American Music Awards.