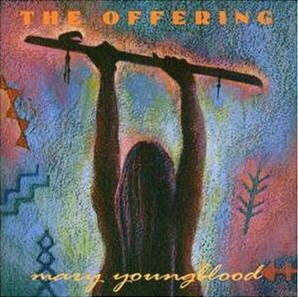 On this debut release, Mary Youngblood performs on a variety of flutes, crafted from various types of wood and in different keys, giving each one its own unique sound.

Television audiences were first introduced to Youngblood on a PBS special entitled, American Indian Circles of Wisdom," which featured Youngblood's original compositions. A top emerging artist, Youngblood has been featured in News From Indian Country, Explore Indian Country, Native Peoples Magazine and Aboriginal Voices. Songs from "The Offering" will also be featured on "Heartbeat II," a compilation of Native American Women artists on the Smithsonian Folkways label. Youngblood's music is also included on "Naturally Native," a 1998 film produced, written and directed entirely by Native Americans.

"The Offering," a traditional solo flute release, features all original compositions recorded live in the natural acoustic space of the underground Moaning Caverns of California. The Flute comes alive in the hands of Mary Youngblood. Her haunting music is much more than a song, it is "liquid poetry, a prayer."

Recorded live in 1997 inside the Moaning Caverns Executive Producer, James Marienthal said, "We listen in awe as the music flows forth, resonating throughout the cavern. Besides Mary's flute and breath, the only sound heard on this recording are the natural sounds of the cavern, which add just enough presence to let yourself imagine being there."